On 27 December 1943 France issued a beautiful set of six stamps depicting the regional caps of France in the 18th Century. Two of the stamps from this series are of particular interest for this blog. Both of the stamps I'm about to showcase were designed by Decaris, but only one of these he engraved.

First we'll study the stamp Decaris designed but did not engrave. For the sake of details, the stamp was engraved by Emile Feltesse. This stamp illustrates an example of headdresses worn by women in the province of Breton. The Bretons are an ethnic group located in Brittany, France. The heritage of the Bretons can be traced back to Great Britain, particularly the south western regions including Cornwall. These people fled Britain to evade rampaging Germanic tribes.

Let's take a peek at the stamp, remembering Decaris was only responsible for its design. The face value of this stamp is 1f20 with a surcharge of 2f designated to the Relief Fund. The stamp has a lightness and frivolity captured well by the cheeky grin on the girl's face and the birds frolicking in the background. Also religious devotion is a strong theme here with the church in the background and the cross around the girl's neck. All in all a charming design. 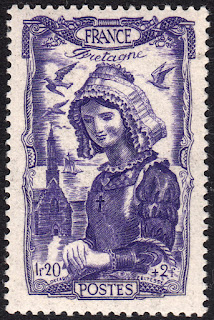 
The second stamp we will look at was both designed and engraved by Decaris. The cap is an example of the headdresses found in Provence, France. Provence can be found in southeastern France, bewteen the Mediterranean in the south, the Rhone River to the west, and the Italian border to the east. Provence was the first Roman province beyond the alps. They called it Provincia Romana. This is from where the modern name evolved.

Now let's take a look at the stamp itself. The face value of the stamp is 5f with a 7f surcharge to be donted to the Relief Fund. The cap is engraved in exquisite detail. The eye is also drawn to the fan and the beautiful border. The mood on the woman's face belies calmness, and a sense of confidence born out of wisdom. This is a true stunner, and a fine example of Decaris' growing talent for engraved portraits. 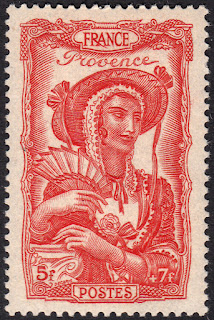 Email ThisBlogThis!Share to TwitterShare to FacebookShare to Pinterest
Labels: 1943, France