I Muse...On Some New Additions

I am constantly working on trying to make my blogs as user-friendly as possible for both my readers and myself. I want this blog to not only shed some historical light n the stamps of Albert Decaris, but also to act as a quick reference tool.  To that end I have added a couple of Pages, which,  I hope, will help out in this capacity. These new Pages can be easily found on the menu bar beneath the blog title. 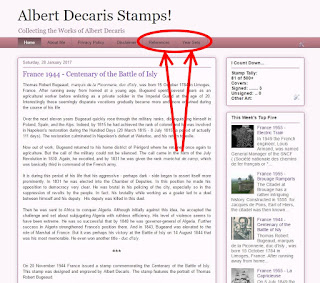 The first added page is for Reference Material. Here I will, over time, add Decaris related articles, books, and Web material. This Page hasn't as yet been added to, so if you have any Decaris references by all means let me know.

The second Page I added as a quick reference spot to Decaris Year Sets. Just click on the year and it will take you straight to the relevant post with a list of all the stamps issued that year, including images. This is a continual work in progress Page, so please keep checking in from time to time.

I hope these news additions will make your time spent perusing this blog more fruitful. As always, if you have any comments or suggestions to further improve the blog, I'd be happy to hear from you.

Email ThisBlogThis!Share to TwitterShare to FacebookShare to Pinterest
Labels: * I Muse...

France 1944 - Centenary of the Battle of Isly

Thomas Robert Bugeaud, marquis de la Piconnerie, duc d'Isly, was born 15 October 1784 in Limoges, France. After running away from homed at a young age, Bugeand spent several years as an agricultural worker before enlisting as a private solider in the Imperial Guard at the age of 20. Interestingly these seemingly disparate vocations gradually became more and more entwined during the course of his life.

Over the next eleven years Bugeaud quickly rose through the military ranks, distinguishing himself in Poland, Spain, and the Alps. Indeed, by 1815 he had achieved the rank of colonel and he was involved in Napoleon's restoration during the Hundred Days (20 March 1815 - 8 July 1815, a period of actually 111 days). The restoration culminated in Napoleon's defeat at Waterloo, and his return to exile.

Now out of work, Bugeand returned to his home district of Périgord where he returned once again to agriculture. But the call of the military could not be silenced. The call came in the form of the July Revolution in 1830. Again, he excelled, and by 1831 he was given the rank maréchal de camp, which was basically third in command of the French army.

It is during this period of his life that his aggressive - perhaps dark - side began to assert itself more prominently. In 1831 he was elected into the Chamber of Deputies. In this position he made his opposition to democracy very clear. He was brutal in his policing of the city, especially so in the suppression of revolts by the people. In fact, his brutality while working as a goaler led to a duel between himself and his deputy.  His deputy was killed in this duel.

Then he was sent to Africa to conquer Algeria. Although initially against this idea, he accepted the challenge and set about subjugating Algeria with ruthless efficiency. His level of violence seems to have been extreme. He was so successful that by 1840 he was governor-general of Algeria. Further success in Algeria strengthened France's position there. And in 1843, Bugeand was elevated to the role of Marshal of France. But it was perhaps his victory at the Battle of Isly on 14 August 1844 that was his most memorable. He even won another title - duc d'Isly.

On 20 November 1944 France issued a stamp commemorating the Centenary of the Battle of Isly. This stamp was designed and engraved by Albert Decaris. The stamp features the portrait of Thomas Robert Bugeaud. 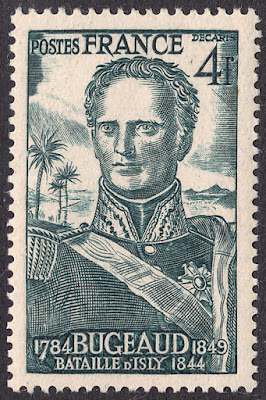 What I see in his design is a young man gazing proudly towards the future. Perhaps here we see an attempt to restore pride in France's military history during a period of immense turmoil in the country. I find the choice of subject a bit ironic, but engaging in personal political opinion is beyond the scope of this humble blog. Speaking of the engraving itself, it is another fine example of Decaris' personal take on portraits.

Email ThisBlogThis!Share to TwitterShare to FacebookShare to Pinterest
Labels: 1944, France

The Citadel at Brouage has a rather intriguing history. Constructed in 1555  for Jacques de Pons, Earl of Hiers, the citadel was then known as "Jacopolis" At the time the citadel was an ocean port in, what was said to be, one of the most beautiful harbours in all of France. The port prospered. Then during the reign of Henry III (1573-1575), the city, now boasting a population of some 4000, was renamed Brouage.

After Louis XIII (1610-1643) became King of France, the role of the citadel began to twist. One Cardinal Richelieu became the governor of the city. Under his control it became a Catholic base used mainly to control the Huguenot region. Then, Marshal Vauban, during the reign of King Louis XIV (1643-1715), saw the strategic potential of Brouage and transformed it into a military stronghold. .

It was during the French Revolution (1789-1799) that the colourful history of Brouage took its darkest twist. It became a prison for unsubmissive clergy members. One shutters to think what went one behind its walls during those dark days.

Interestingly, while all this history was rolling by, the marshlands surrounding the city grew and grew until the port city became landlocked. Unable to retain its strategic importance it fell into disuse. These days the Ramparts of Brouage are quite a tourist attraction. Many like to "walk the ramparts". 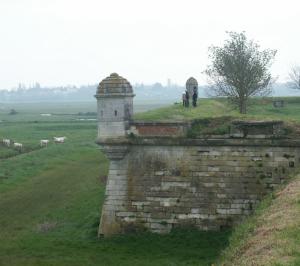 On 17 October 1955, France issued a lovely set of nine stamps highlighting some of the sites and monuments of France. One of the stamps in the set focuses on the Ramparts of Brouage. This stamp was designed and engraved by Albert Decaris. 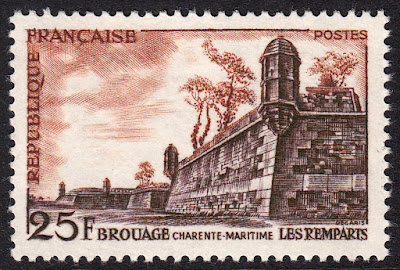 This stamp truly amazes me. Basically what we are looking at here is... a wall! Yet i love it. That to me is a sign of tremendous skill. Making a wall exciting. But Decaris does just that. To me, the combination of the sepia tones, the gorgeous textures of the walls, and the lovely trees standing proudly atop the ramparts, makes this stamp a visual feast.

Email ThisBlogThis!Share to TwitterShare to FacebookShare to Pinterest
Labels: 1955, France

In 1949 the French engineer, Louis Armand, was named General Manager of the SNCF ( (Société nationale des chemins de fer français or "French National Railway Company"). During his tenure he worked very hard to establish electrification of train lines in AC voltage. In 1953 (I think that is the date) the Valenciennes-Thionville line - the main industrial artery in north-eastern France - was electrified using single-phase alternating current. This improvement helped to increase critical shipments of coal, iron ore and iron and steel products. 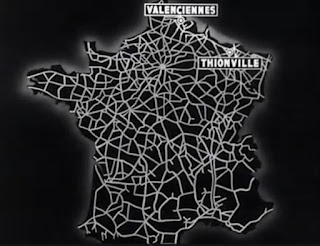 On 11 May 1955, France issued a stamp to promote the electrification of the Valenciennes-Thionville line. The stamp was designed and engraved by Albert Decaris. 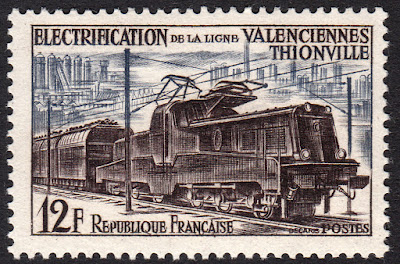 Now I have to say, I know next to nothing about trains, so it took me quite some time to work out what type of train is depicted here. But I believe I have cracked it! Initially I thought that the locomotive was a BB 12000 class. But it just didn't quite look right. There was no apron between the front and rear drive wheels, which the locomotive depicted clearly has. Then I found a short video in French that shows the exact train in the stamp. I now think the train is a CC 14000 class locomotive. 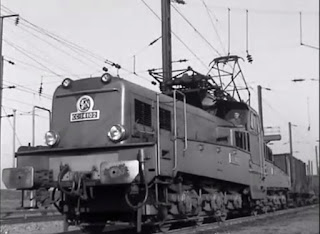 If there are any train buffs out there who can confirm this one way or another, I'd love to hear from you.

Email ThisBlogThis!Share to TwitterShare to FacebookShare to Pinterest
Labels: 1955, France

On 5 July 1849 the French ship La Capricieuse (en. The Capricious) was launched in Toulon, France. She was a 22 gun corvette commissioned by the French Navy. She served in the Far East twice during her career and she was involved in the Crimean War as a troop ship. In 1855 she sailed on a friendship mission to Canada. 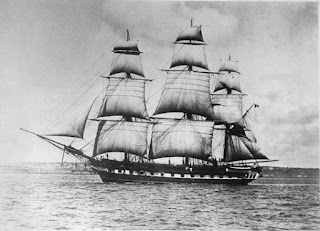 On 7 July 1955 France issued a stamp to commemorate the 100th Anniversary of the French ship Capricieuse's friendship mission to Canada in 1855. The stamp was designed and engraved by Albert Decaris. By this point in his career, Decaris had already engraved many ship designs, each, in my opinion, better than the last. Let's take a look at the stamp... 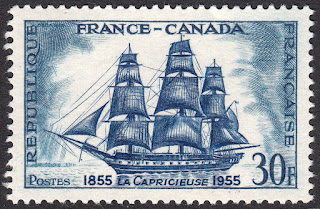 The detail in this design is superb. From the rigging to the billowing sails, Decaris has captured the true essence of this beautiful vessel. I love it!