The origins of the metric system can be traced back to 1799 during the French Revolution. Fed up with the existing units of measurement, the French Republic implemented a new decimal system based on the kilogram and the metre. Initially, the system didn't last. France reverted back to their old system in 1812. But then in 1837 it was once again adopted by France, and this time it stuck.

In order to maintain this system internationally, three controlling bodies were set up in 1875 in France:-
On 6 October 1954 France issued a stamp to commemorate the 10th General Conference on Weights and Measures (number 3 on the list above). The stamp was designed and engraved by Albert Decaris. 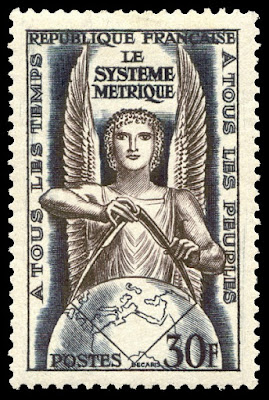 This beautiful stamp depicts the Angel of the French Republic measuring a meridian arc across the earth. Decaris has captured the far-reaching impact of the metric system in a profound way. Stunning!

Email ThisBlogThis!Share to TwitterShare to FacebookShare to Pinterest
Labels: 1954, France