Human history has been witness to some of the most brutal acts of violence. Violence on a scale incomprehensible to imagine. Perhaps one of the most blood-soaked periods of our history was World War I, a war that claimed over 41 million souls. Staggering! And the worst of the battles in this time of mass slaughter was the Battle of Verdun.

World War I was the embodiment of a new age of warfare. New weapons of war such as the howitzer, the mightiest of these being Big Bertha, which could reign destruction on a enemy target up to 9 km away. It was also the dawn of the flying aces of aerial warfare. Who hasn't heard of the legendary Red Baron? Destruction also now came from underwater in the form of submarines, such as the classic German U-boats. And although chemical warfare had been around for a very long time, World War I saw the first mass use of such diabolical weaponry. Chemical agents such as tear gas, and more lethal agents like phosgene, chlorine, and mustard gas were being employed in an attempt to smoke enemies from entrenched areas.

Which leads us to the birth of an horrendous age, the age of Trench Warfare. The most famous arena for Trench Warfare in World War I was the Western Front, a vast area of land riddled with complex networks of trenches, an area where millions of French and Germany soldiers died for little or no gain in territory. Soldiers lived in appalling conditions, before, like lambs to the slaughter, they went 'over the top' of the trench to be mowed down by enemy artillery. It was a ludicrous method of warfare where soldiers died seemingly at the whim of their commanding officers, who, for want of anything better to do, ordered charge after charge. The British public referred to their soldiers as "lions led by donkeys". Indeed, on the first day of the Battle of the Somme, the British lost 60,000 men - a death toll difficult to comprehend.

The longest battle in the trenches was the Battle of Verdun from 21 February to 18 December 1916. I shall not belittle the sheer horror and complexity of this battle by trying to summarise it here. Instead, I will throw a few statistics your way. The Battle of Verdun was fought between French and German soldiers. It raged for 303 brutal days, and is considered one of the most costly battles in human history. It is currently believed that the total number of casualties in the battle amounted to 714,231. 377,231 of these were French and 337,000 German. Averaging out these staggering numbers we get roughly 70,000 casualties a month or over 2,300 a day! I can't even begin to imagine! For an in-depth analysis of the battle click HERE

On 5 March 1956 France issued a stamp commemorating the 40th Anniversary of the Battle of Verdun. Albert Decaris was given the honour of designing and engraving this important stamp. I think he did a beautiful job with this difficult task. 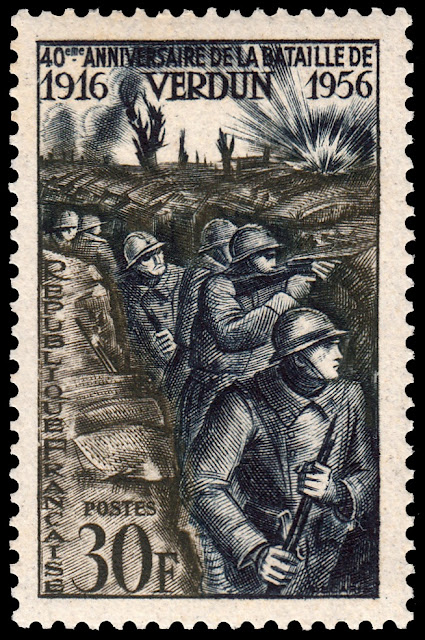 Over time, quite naturally, French Post have issued stamps commemorating this battle, all of which have been beautifully rendered. In fact, I believe there to be an interesting blog on that subject on the horizon. But for now, take a look at this page to peruse more Battle of Verdun stamps, click HERE