On 14 February 1949, France issued a set of four stamps showcasing some of the many trades that have been and, in some instances, continue to be, the life blood of the country. Two of the stamps in this set, the 3f+1f value and the 8f+4f value, were designed and engraved by Albert Decaris.

The 3f + 1f value celebrates the French farmer. The 1f surcharge on this stamp went to the Red Cross. 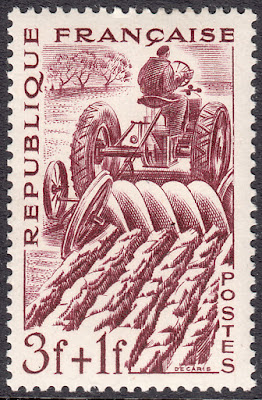 Farming is one of France's most important industries. in no small part due to the fact that the country is self-sufficient in food supplies. Farming in France ranges from cereal crops to beef, pork, and poultry to a range of fruit and vegetables. In the above stamp, Decaris has illustrated a farmer ploughing a field in an old tractor.

Out of curiosity a had a bit of a look on the net to see if I could find a tractor that resembled the one here. This is what I found. It is, I think, pretty close. Unfortunately, I wasn't able to find a make for this particular vehicle. Anyone have any idea? 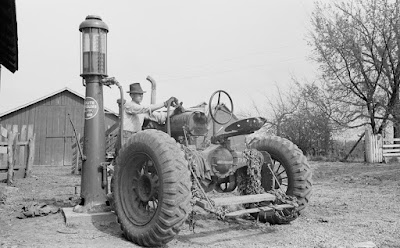 The 8f + 4f value celebrates the hard-working miner. The 4f surcharge on this stamp went to the Red Cross. 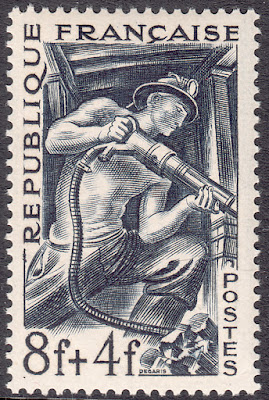 The French have practised Coal Mining from as early as the 12th Century. But it wasn't until the 19th Century that coal mining really accelerated and many new mines were opened. The main areas for coal mining in France were located in the north-east in the Nord-Pas de Calais, in Lorraine, and in the Loire. And Lignite was mined in the south-east in Provence. In this stamp Decaris has beautifully depicted a robust miner wielding a pneumatic drill and showing the rock no mercy.

The drill used by the miner on the above stamp is similar to the real one in this image. 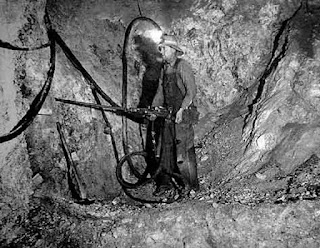 Email ThisBlogThis!Share to TwitterShare to FacebookShare to Pinterest
Labels: 1949, France