On 11 May 1952 France issued a stamp celebrating the 400th anniversary of the birth of Leonardo da Vinci. Leonardo was born 15 April 1452 in Vinci, a province of Florence. He is often seen by scholars as the "Universal Genius" or "Renaissance Man". I could go on for hours, discussing his many, many talents, but that's not really the purpose of this blog. And I feel if I try to summarise all that he accomplished I wouldn't be giving this amazing man the justice he deserves. So here's a link to his wiki page, which is quite good and well worth the read. Click HERE

This superb stamp was designed and engraved by Albert Decaris. 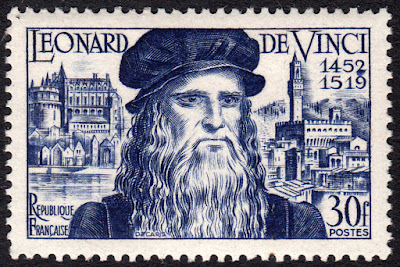 This stamp is literally packed with detail. First and foremost is the stunning portrait of da Vinci. Decaris has captured the essence of the genius' soul in that penetrating gaze. And if you're a regular reader of my blogs you will know that I love engraved beards (hmm, could be an interesting thematic!) and this beard is one of the best I've seen.

There is also plenty of the background detail to study in this stamp. To the right of Leonardo is his birthplace, Vinci. Vinci is a town in the province of Florence. It is surrounded by the beautiful rolling hills of the region of Tuscany, amidst vineyards and olive groves. The area is still today what it was like in the time of Leonardo. One can imagine Leonardo as a child strolling about the hills, dreaming of the wonders of the world, his incredible mind formulating ways of constructing wondrous machines, revolutionary in nature. 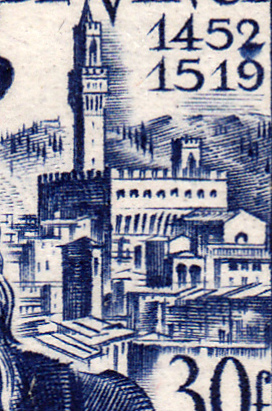 
Moving across the stamp to Leonardo's left, the focus shifts to the Château d' Amboise in France. The Château became a royal residence in the 15th Century. It was confiscated by the monarchy, after its owner, Louis d' Ambois, was convicted of plotting against Louis XI. He was initially sentenced to be executed, but the king spared him and took his Château instead. Maybe the king just wanted the Château all along and contrived a plot to take it? Probably not, but it sounds good. 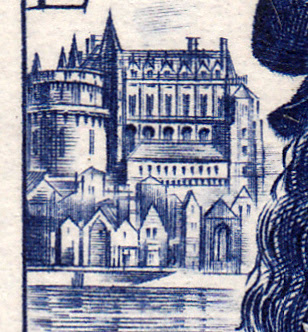 So what does this place have to do with Leonardo, I hear you ask. Well, Leonardo visited the Château in 1515 as the guest of King Francis I. During his stay, he lived and worked in the nearby Clos Luce, which was connected to the Château by an underground passage. How cool is that! It is believed that Leonardo may be buried in the chapel of Saint-Hurbert which adjoins the Château. Below is a photo of the chapel.

Email ThisBlogThis!Share to TwitterShare to FacebookShare to Pinterest
Labels: 1952, France